TC Max® Is a far superior product to the basic formulations for proton pump inhibitors (PPI) made by most pharmacies today and also is one of the best antacids and here’s why. 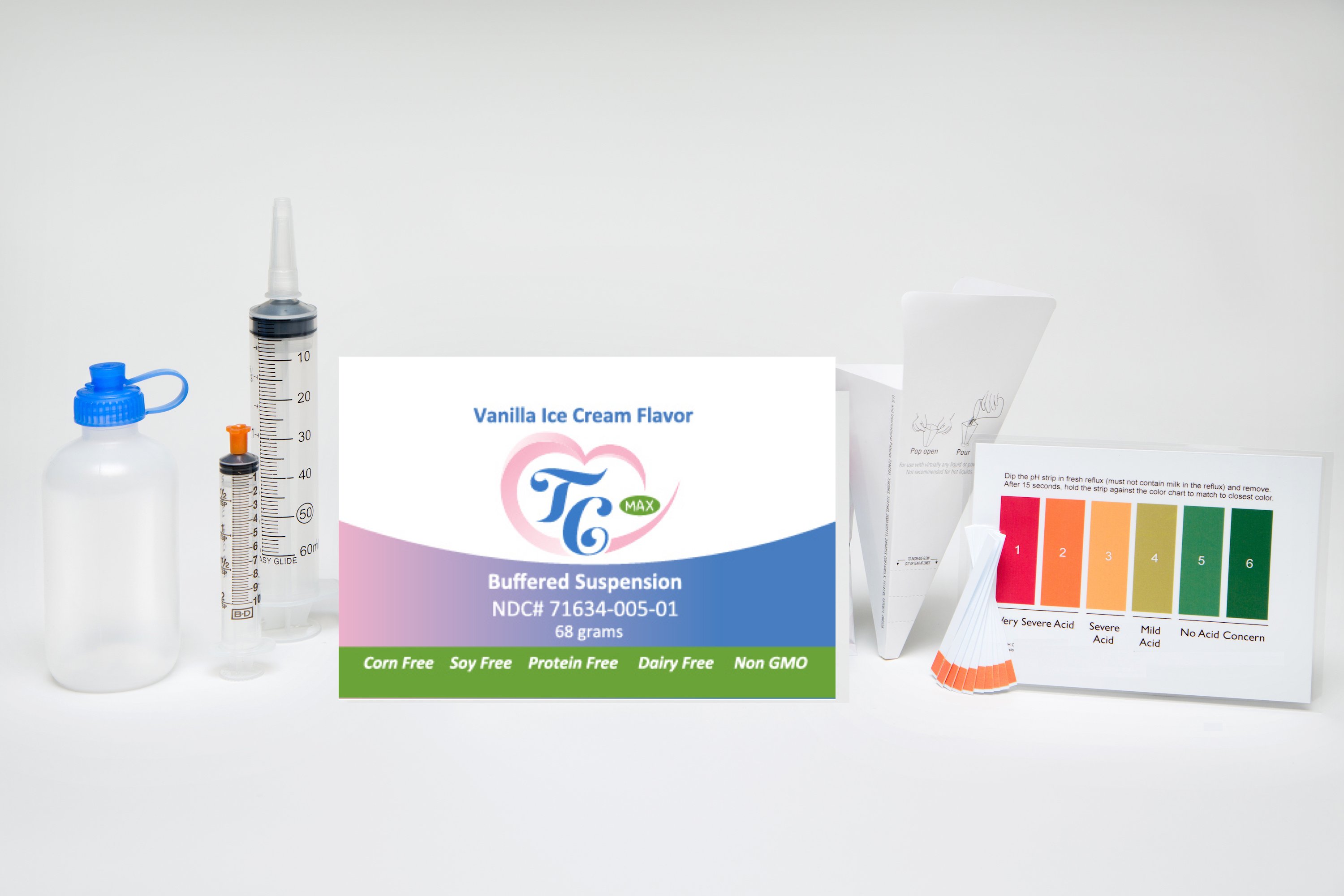 TC Max® was created to overcome problems with the use of SOS and SLS. It's not only cheaper and easier to use but it's a far superior product to First Omep / First Lans and far less expensive.

a. Palatable: Standard PPI compounds contain too much sodium bicarbonate which has a salty and metallic taste; this combined with the bitterness of PPI medicines makes for an unpalatable formulation. TCMax® contains micronized calcium carbonate and micronized magnesium hydroxide, with a very small amount of sodium bicarbonate. This improves the taste profile significantly! TCMax® contains unique flavors and sweeteners to mask the bitterness of PPI medicines.

b. Immediate Release: PPI medications, whether you compound them or take orally OTC, require timing doses around feeding about 30 to 45 mins. However, mixing with TCMax® makes any PPI into immediate release which does not require timing around food.

c. Production of Gas: SOS & SLS were created for adult patients in the ICU who typically had an NG tube. This was acceptable because flavor was not a consideration and any gas produced by the sodium bicarb was easily passed through an adult GI.

Infants are a different situation. Because the sodium bicarbonate combined with stomach acid liberates CO2 gas rather quickly, it can be a significant source of gas in infants/children that creates pressure in the stomach resulting in burping of stomach contents (reflux). This causes a burning sensation and is very painful. Additionally, some of this gas moves into the small intestines where it creates cramping and “colic” symptoms.

d. The micronized calcium carbonate and magnesium hydroxide produce much less gas due to their more desirable interaction with stomach acid, which is slower and more gentle. Hence their predominant use in antacids as compared to sodium bicarbonate.

Note: The micronization (the process of making the particles of ingredients into a fine micro-granule) of calcium carbonate and magnesium hydroxide produces a desirable buffering profile to protect the PPI and is more quickly absorbed into the system because of the ultra-fine particles.

f. Stability: Rigorous stability testing was performed at The University of Arkansas for Medical Sciences using MS (Mass Spectrometry) / HPLC (High pressure liquid chromatography) by Keith Olsen, PharmD. Stability of the liquid formulations of lansoprazole and omeprazole in TC Max® for 60 days was tested and confirmed under refrigerated conditions. Many pharmacy compounds lose stability in 7-14 days even though a 30 day prescription is dispensed.

h. TC Max® packaged in FDA cleared and cGMP facility. Good manufacturing practices facility that assures the product is held to high standards of manufacturing in a secure, sterile environment.

i. TC Max® is an enormous cost savings to your patients. The average cost of a compounded medication can be $400 to over $1500 depending on the compounding pharmacy. TC Max allows the family to take control over their child’s care by allowing them to mix at home for less than $3 a day.

j. It's so easy to use. There will some questions that come up in this area so we ask you to reach out to us in the FREE 15 min call so we can coach you on how to use this kit.