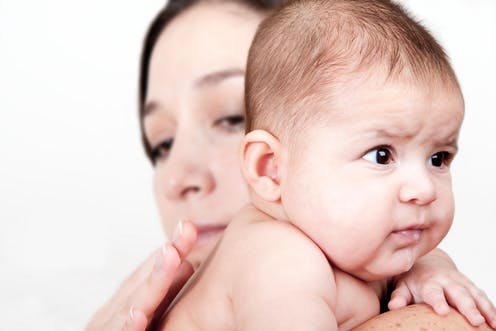 If you filled out the questionnaire this page will explain the moderate reflux symptoms your child may be suffering from. We realize these symptoms may not seem mild but they are only classified as mild as indicated by medical practitioners.

You can always respond to the questionnaire if you have further questions. Please review the symptoms below for detailed explanations a about your baby's symptoms.

Rubbing or Hitting - Nose and Face - Sneezing Without Cold: acid can cause release of histamine when it comes into contact with the sinuses, nasal mucosa - this causes burning and itching.  They respond by hitting the affected areas. Same thing if teething is occurring or can be a combination of both.

Recurring / Abundant Hiccups: Acid moving up the esophagus stimulates the phrenic nerve and that nerve innervates the diaphragm.  That causes the hiccups.

Lack of interest in eating: The tissue in the esophagus has become damaged from the consistent exposure to acid. It’s similar to putting lemon juice on a cut. The tissue is raw and then when a baby eats, the body produces acid and the acid comes in contact with the already damaged tissue in the throat. So the pain causes the child to avoid eating. This symptom can later develop into a much more difficult symptom to treat - Eating Aversion.

Excessive Gas: Typically from acid interacting with formula or milk which causes the production of C02 gas.

Rash on Face, Neck, Chest: A “rash” (with bumps) is not usually from reflux. However, flushing or blotchy redness can be a symptom of reflux caused by histamine release. This is due to the irritation and inflammation from the acid coming into contact with mucus membranes of the upper airways, sinus, mouth and throat.

Abundant Salivation: Salivation is often a protective mechanism. When the mucous membranes are damaged by acid, inflammation occurs (often with histamine release) and mucus is produced along with abundant saliva. Histamine release also occurs during teething (which is why teething can cause reflux flares).

Biting hands: Babies will naw at their hands for two reasons. One is because their gums are itching and two because the histamine release from teething may cause reflux. When they bite their hands it creates additional saliva production. Saliva naturally contains bicarbonate, a chemical that helps to neutralize acid in the digestive tract. The bottom of this page has GREAT illustrations to explain.