A Bravo Probe in Children

The Bravo Probe in Children article is about Upper Esophageal pH monitoring of Children with the Bravo pH capsule. It is written by Marcella Bothwell, MD; Jeffrey Phillips, Pharm D and Susan Bauer, APN.
The Laryngoscope, Lippincott Williams & Wilkins, Inc.© 2004. The American Larygological, Rhinological and Otological.

Reflux of gastric contents is a common, well documented occurrence among adults. Since the early 1980s, gastroesophageal reflux disease (GERD) has been increasingly recognized as a clinical entity among children. Several investigators have noted that approximately half of all newborns have reflux. In the study of Nelson et al., peak incidence of reflux occurred at approximately 4 months of age; approximately 67% of these infants exhibited signs of reflux disease. Prevalence decreased to approximately 5% at 1 year of age.

Although reflux is a common occurrence among young children, making a confirmatory diagnosis is difficult in the clinical setting. Pediatric patients are not always cooperative with a 24 hour pH study. Questions about the validity of such studies exist, and the interpretation of the findings can be difficult.

Technique of placing a Bravo Probe in children

Children suspected of having gastroesophageal reflux affecting the upper airway have a pH probe or “capsule” put into place in the operating room while undergoing other procedures (predominantly, direct laryngoscopy with bronchoscopy) If there are no plans for surgery, the traditional pH probe is placed through the nose by our colleague. The Bravo capsule technique is used to enhance the diagnosis of reflux, ot to completely change how we diagnose reflux. 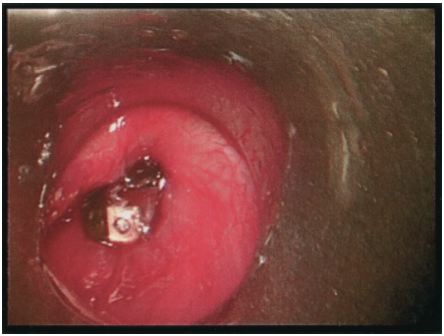 pH probe in the esophagus of an infant with acid reflux

For an otolaryngologist trained in upper airway management, this technique has been uncomplicated. After securing intubation with an appropriately sized endotracheal tube, the Parsons laryngoscope is reinserted, lifting the larynx forward. This identifies the cricopharyngeal opening to the esophagus. The capsule is placed in the proper position, and the suction device is attached. A small amount of mucosa is gathered and pinned by the delivery device. The capsule is released from the delivery system and remains in place. When detaching the capsule from the delivery system, it is important to turn off the suction machine and also disconnect the suction device from the delivery vehicle to remove any residual suction from the system. This allows a much easier release of the capsule onto the esophageal mucosa without injury. This also aids in the prevention of capsule related complications. Esophagoscopy has been routinely used to confirm appropriate placement in the upper esophagus, but it is not necessary.

While the capsule is in place, the child wears a receiver device, which is approximately the size of a pager. The receiver need not be worn but should remain within 3 feet of the child to ensure proper recording of the data. The child can go home and is allowed to eat normally. No changes in dietary habits are necessary with the capsule. Some procedures require children to be on restricted diet regimens, and this could potentially confound pH data with this particular device.

The capsule is designed to slough off the mucosa in 3 to 5 days as the mucosa rejuvenates itself. The capsule travels the alimentary canal and is shed in the stool a few days later. Parents are instructed not to retrieve the capsule from the stool because there is no need to do so.

Medtronic has a software package that provides traditional pH measurements and is adjustable. All data must be interpreted within the context of the individual patient and procedure. We have found that a 48 hour time period provides us with reliable results, and parents do not need to replace batteries (Fig. 4). As an alternative, two separate capsules can be placed at different locations, providing 24 hours of data from each site. The reports have been easy to interpret. With the improved data acquisition afforded by the Bravo pH capsule, the significance of the amount and duration of acid exposure can be more adequately investigated for the upper airway. 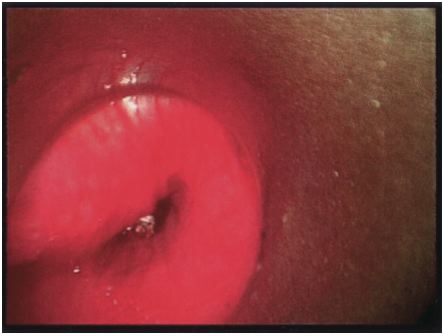 Twenty five children have undergone Bravo pH capsule placement. These children were under general anesthesia for various procedures, including direct laryngoscopy or bronchoscopy or both, tonsillectomy or adenoidectomy or both, and sinus surgery. Age at pH capsule placement has varied from 3 months to 11 years, depending on need, with an average age of 3 years at the time of placement. Indications for the operating room were various, including vomiting and dysphagia, “noisy breathing,” chronic cough, aspiration pneumonia, reactive airway disease recurrent croup, known subglottic stenosis, nasal airway obstruction with rhinosinusitis, sleep apnea, and restrictive lung disease. Three children have had lansoprazole administered at the approximate 24 hour mark, and pH measurements markedly improved rapidly (Fig. 4). We have observed no serious complications as a result of this test. In only one patient was the capsule difficult to remove from the delivery system; a small tear in the superficial mucosa resulted. The child was observed overnight for complications of mediastinitis, but none was noted. No other children from the study group encountered complications as a result of the evacuation of the capsule.

Discussion Of The Bravo Probe In Children

At the University of Missouri (Columbia, MO), we have successfully placed 25 Medtronic Bravo pH capsules. After discovering that the suction device should not only be turned off but also disconnected from the delivery system, we have had no capsule related complications. It is important for those not familiar with the complications of the “airway foreign body” to be cognizant of placing the capsule just below the protection of the cricopharyngeal muscle sphincter.
The mere diagnosis of extraesophageal reflux has been controversial, including such features as the level of pH, time of acid exposure, and number of incidences. Patients with extraesophageal reflux may have a negative finding on esophagoscopy for reflux. However, extraesophageal reflux can cause considerable damage to the tender respiratory epithelium of the larynx, trachea, nose, and middle ear. Pharyngeal probes have been instrumental in the diagnosis of a disease that otherwise was scoffed at by the community of gastroenterologists. A negative finding on proximal probe does not exclude the diagnosis  of reflux into the pharynx. The Bravo pH probe is used
in addition to traditional reflux tests. It can produce useful information related to treatment (Fig. 1).
Some children, as well as some parents, are reluctant to place conventional pH probes because they appear to be uncomfortable. Indeed, the conventional probe tubing may produce artifactual reflux episodes. By having the 48 hour period to study the child, we are able to study the effects of lansoprazole at 24 hours into the data gathering period. Clearly, the “normalization” of pH during medical management is evident from early data.
Children at our institution have done exceedingly well using the Bravo pH capsule system. We recommend it for its ease of placement, its comfort to the patient, and the duration of the data obtained. Studies for advanced methods of interpretation and understanding of the retrieved pH data are under way.

In the January issue of The Laryngoscope, “Time Scale for Periosteal Readhesion After Brow Lift,” (114[1]:50 – 55) contained the word “repeat adhesion” twice within the abstract when the correct term was “readhesion."
In addition, the last sentence of the second paragraph of the discussion should read, “In the present report, both histological and biomechanical shear strength properties of the bone periosteum interface healing under tension were studied.”